On the 30th of July 1751, Maria Anna Walburga Ignatia Mozart was born in Salzburg, Austria.

The fourth born child of Leopold and Anna Maria Mozart, she is the first child who survived infancy. Her father was a musician, a composer and a music teacher. When she was six, her little brother Wolfgang Amadeus completed the Mozart’s family.

As a child, Maria Anna was nicknamed Nannerl. At the age of seven, her father started to teach her the harpsichord and Nannerl kept on improving her musical skills in her young years. Her little brother soon joined her, eager to do what her big sister was doing, and the both of them revealed themselves to be exceptionally talented young musicians.

Leopold, impressed by his children, decided to take the Mozart family on a European tour where the Mozart children could exhibit their musical genius in concerts held for the nobility of the country.

As they performed across Europe for 6 years, they became renowned child prodigies. In the beginning of the European concert tour, Nannerl was 12, while Wolfgang was 6 years old.  While Nannerl stopped touring with Wolfgang when she was about to be 18, her little brother kept on impressing assemblies, notably in Italy, or Paris…

Nannerl stayed in Salzburg for several years, teaching music privately, up until her marriage to Johann Baptist Franz von Berchtold zu Sonnenburg in 1783. Her marriage took her to a village 30km away from Salzburg where she lived until 1801, when her husband died.

She came back to stay in Salzburg for the rest of her life (she died in 1829) where she gave again music lessons in the privacy of  her home. 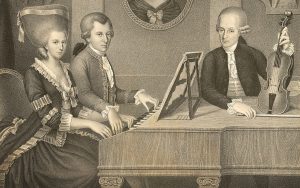 What do we know about her ?

What is mostly known about Nannerl’s life is her time as a young girl touring Europe with her brother. Multiple diaries from members of noble families, or towns’ chronicles, but also personal letters, record the exceptional talent she displayed as a child.

“No one could have a more precise and brilliant execution”

“His daughter, eleven years of age, plays the hapsichord in the most brilliant manner” – From Friedrich melchior von Grimm’s “correspondant litteraire”

“Mlle Mozart, now thirteen years of age, and moreover grown much prettier, has the most beautiful and most brilliant execution on the harpsichord”

Thanks to these descriptions,  we know that Nannerl was praised and admired for her talent. Alongside her little brother, she amazed those who got to see her play. It is known that she stopped performing when she was around 18, possibly because she reached a marriageable age. We know that she did not stop playing however. Her brother and father’s letters to her and her mother mention her musical activity over the years. In those letters, it is implied that Nannerl spent unhappy years after when she stopped performing. Her father and brother showed concern in their letters, for example her father asked in one of his letter if “nannerl [is] keeping busy practicing the harpsichord regularly”.

Everyone knows Wolfgang Mozart, but who can tell about the sister ?

Nannerl remained unmentioned, untold from historical accounts of her time. While Wolfgang is celebrated, admired and remembered In Salzburg and around the world in multiple forms, Nannerl’s memory was not kept alive.

Of course, unlike her brother, none of Nannerl’s composition has survived time, preventing us to know about her music.  Have they ever existed ? Was it destroyed ? By whom ? Her or her father ? There are questions left unanswered. We know Nannerl composed her own music. Her brother mentioned it in his letters to her while on his tour in Italy. He complimented her about a song she wrote.  Apart from this information from Wolfgang, we do not have records from Nannerl expressing her musical talent.

Now, why did historians, teachers or agents of memory not tell us about Nannerl ? It may be said that Nannerl was not as talented as Wolfgang, that there are nothing more to say. They focused on keeping Mozart’s legacy and music alive generations after generations. It seems Nannerl’s story did not matter. It was their choice.

While researching about Nannerl, it is interesting to see the intriguing mystery surrounding her figure. Indeed, despite the lack of knowledge and awareness regarding her existence, or maybe because of, it seems she attracted the attention of authors, filmmakers and creators. The Kingdom of Back by Marie Lue, the play The other Mozart by Silvia Millo or the French movie Nannerl, la soeur de Mozart by Rene Feret are examples where I recognise  the fascination the memory of Nannerl brought about to those who read about her for the first time.

During interviews about their works, these creators shared their initial unawareness regarding the existence of Nannerl, how they came to know about her, and their desire to reveal her story to the world. They got interested in her talent, her life and gave her a story and a voice.

While Nannerl has been forgotten for decades and centuries, her name seems to be given more attention in recent years. She is more regurlaly mentioned and credits are given to her talent. Of course, it will no be possible to play her music or listen to it. But it doesn’t mean that we can’t celebrate her memory.  This is the memory of a woman in the end of the 18th century who was a child prodigy, a talented musician, but whose possibilities and ambitions were cut short when she was considered a woman, able to be married and having to comply with the role of a woman of that time.

What can we learn :

Researching about Nannerl is captivating. As historians, we are used to read and research about the meaning of old documents. The life of Nannerl is told in between lines, in some letters from her father and brother. The context in which she evolved, their perspectives when they write to her are only a portion of knowledge about Nannerl, yet they are worth studying !

Furthermore, the Mozart family would be a great study exemple to compare a girl’s life and a boy’s life in the 18th century. Sister and brother, they received a musical education at a young age by their father. Talented, they toured Europe together. Yet, Wolfgang had the posibility to pursue his musical genius for the rest of the life while Nannerl had to step back as soon as she was no longer considered a child.